Everyone has a bad year.  My last blog post was a good indicator of that.  But it’s also about what you make of it.  An early season injury, especially one that lasts the whole year and adds to the fatigue and declining performance reminds you and your body that you have to take the time to slow down.  You have to allow for some down time.

After vacationing in Canada, reconnecting with old friends and regrounding with family, I was ready for the Green Mountain Stage Race in Vermont.  This race had been on my bucket list for some time.  And even as the registration deadline was looming, I made it to be a last minute decision.  My fatigue was beyond the point of making any competitive difference because of the overtraining, but I figured this would be a good race regardless.  It would be good practice and preparation for when my fitness and form would come back to me next year.  This time, it was to just get to know the course.  It would be four days of racing – something I’ve never attempted before.  The Killington Stage Race was only three days, and even that was unrelenting.

It was all uphill from the start.  The start of my race was a disaster.  I couldn’t keep my balance and nearly fell off my bike in the staging area.  I had to unclip in order to keep from falling.  And then I tried again after the official gave me an additional 5 seconds to get myself ready.  But still, I couldn’t get off the line correctly.  A little bit frustrated, I had no time to be fully mad.  I clipped in on my own power, taking my time to set off because I knew the next 5 miles or so were going to be tortuous.  There’s no rush to experiencing pain.  I paced myself to go hard only at the start, ease myself in for the negative split, finishing the race by passing two racers.  Although my power was questionable, lightness ruled the day.

An early morning drive in my BMW M3 over the Appalachian Gap at speed was epic.  On the other side revealed a perfect race course, although a bit windy at spots.  The temperature and conditions were otherwise perfect.  Smooth roads made everything better.  The pace was a little docile in the beginning.  After the first lap, which the Masters field usually uses as a warmup lap, the pace picked up above a crest.  I held on for as long as I can, knowing that a few other riders got shelled immediately.  So that means my form wasn’t all too bad.  However, I dropped back, trying to not re-injure myself and only gave more effort where I felt like I could in some short punchy climbs.  I ended up with two other, less experienced riders, taking turns pulling at the front, until the last kilometer where we played a bit of cat and mouse before the sprint.  I expended too much energy before the sprint and relegated myself to the back, not having enough kick to hit the line first. 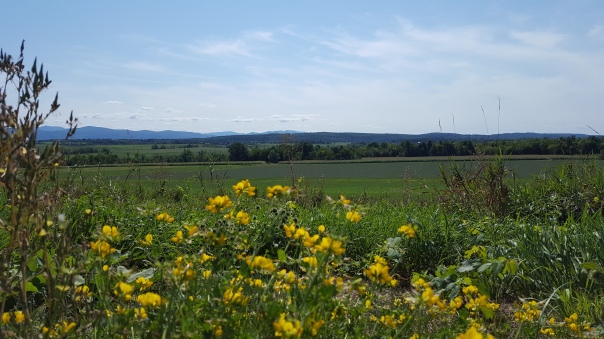 Two minor climbs and two major climbs.  All steep enough that if you didn’t have the energy, fitness and stamina, you were pretty much toast even before you started.  Nervous but positive, I knew this day was going to be difficult because of my fatigue.  The recovery and preparation from the night before was adequate in that I did all the Yin Yoga I needed and properly nourished myself with only the best foods.  It helped that my Maine housemates were great cooks the past couple of nights and the habit of cycling, stretching, eating, sleeping eating, then more sleeping was starting to form.  I could get used to this.  Life was simple being an amateur racer with few worries.  Take care of your body and your bike.  That’s all.  It was a great escape from the world of other life responsibilities.  The only person you’re accountable to is yourself and your goals.

I was happy to have survived Granville Notch as the peloton stuck together for most of the time.  A few of us tried to create a breakaway only to be brought back.  It was a good test of who was in it to play for the stage and for general classification.

The attacks started on the climb up to Middlebury Gap.  Naturally, I was off the back and kept my pace conservative after trying to hang on for as long as I could.  The consolation prize was that I started to drop the Gruppetto, only to be caught on the downhill on the other side at 55 mph.  It was an exhilarating downhill with curves and bends.  I didn’t weight enough to keep my momentum going and I was passed.  I tried to keep up and then went for a chase only to be left farther back with a couple of other fellows whom I met the day before.  We rode together knowing we weren’t competitive and just tried to enjoy the ride.  Baby Gap (4% grade) and then the proper Appalachian Gap (10%) at 2,358 feet were up ahead.  Some sections went up more than 13% grade and the last section was a lung-busting 15%.  I swear there were undocumented sections that felt like 20%.

At the bottom of the climb, a couple of women passed us at speed as a battle was brewing.  The last ascent would be the last place anyone could make a difference by either gaining time or losing it.  I gave words of encouragement as they hammered up the 2.6 mile climb.

Somewhere along the way, I parted with my buddies.  I left them behind and we said our goodbyes for the moment.  Heavy breathing replaced pleasant conversation for the next twenty two minutes.  I took some sections a couple of feet at a time, almost nearing a standstill, but not to the extent of climbing up Hurricane Mountain Road in New Hampshire.  Masochists ride up that wall over and over again.

The last 500 metres were the longest.  I passed one of the women who attacked at the bottom.  She was spent as if she put her gearing in reverse.  At the top and across the line, it felt like a block party.  Music, cheering, food, drinks – everything and everyone you could imagine was there.  The vista was incredible.  It was your reward for being courageous and persevering in spite of setbacks.  It was an accomplishment greater than completing the Queen Stage in the Killington Stage Race.

My new friends caught up several minutes later assessing the climb and our efforts.  The other efforts was making it alive down the gap on the other side to reach the start area.  Unfortunately, I forgot to turn on my Garmin to record the descending section, but I’m sure I reached more than 60mph on the rutted, heaved and uneven surface.  For safety, I had to completely let go and let gravity do its job.  It felt like skydiving – not like I’ve ever done that before.

This was the home stretch.  Cycling felt like my day job, but in a good way.  Excitement instead of nerves.  And with three days of racing behind me, I felt accomplished despite not being competitive.  I did it anyway and that was all that mattered.  I went into the criterium with the same attitude.  Knowing that I wouldn’t last long, that at some point I would be lapped and even thrown out, I went for it regardless.

I was able to get in just one practice lap before we started.  There was an interlocking stone section up the first straight which made things interesting, and then twisting, turning, technical bends before hitting the slight downhill into a 90-degree bend back up to the start/finish line on a slight grade.  Do enough laps, and it will wear you out.  I was done by the eighth lap, eighteen to go.  The consolation prize was that I’d get the same time as the average racer, plus some time added.

But during the race, I made it my mission to practice to perfect my turns, hit the apexes at the right time, accelerate out of the corner and put in massive efforts up the slope and soldier on into stones.  A few of them rattled as I raced over them.  Some people just race hard but not mindfully.  Picking the right racing lines makes all the difference.  It’s part of the technique.  It’s part of survival.  Even though I was thrown out at the end, it was an amazing experience.  Part of it was having so many people watching us race, feeling the buzz and excitement.  I never had that before.

In the race’s general classification, I ended up 39th of 43 riders who finished.  I expected better, but I performed with what I was given.  I was still happy about the experience – having spent time with some great friends from Downeast Racing and those racing in my category, and having the best weather and roads to race on in Vermont.