If you think cycling is always glamorous with perfect kits, toned, tight bodies and expensive bikes, consuming espressos with exotic pastries and boutique donuts, you’re partially right.  What you don’t see is the other side of cycling, especially when it comes to racing.  Not everything is a bed of roses, though they do smell nice.  There’s personal sacrifice, disappointment and physical plateaus.  You’re putting yourself on the line, spending exorbitant amounts of time, money and effort for training, equipment, traveling, lodging and food to accomplish goals you set out for yourself in the beginning of the year.  These are the things you don’t really see (unless spoken of) because you’re trying to answer a calling with each race.  You do it for the challenge – but there’s no glamour in it.

At this point, I started to feel the off-season training in my legs, training I started last November, most notably in my glutes and piriformis.  There was little rest in between races as my conditioning needed to be in top form as I monitored my Strava graph lines carefully.  Little did I know that it would actually hurt me, thinking that pushing through the fatigue would help.  I’ve done it before, and with success.  This time, however, it was different.

“If your life just got a little harder, that probably means you just leveled up.”

That was my goal this year – to level up.  And this is how it went:

This was a big turnout by our team.  4 men and 4 women.  Since the Tour of the Battenkill was no longer USAC sanctioned, this was a proper one day race for many of us in Tall Sock Racing to appear.  I don’t recall the details from the men’s CAT 4 race since I was racing in the Master’s category, but the women fared well.  Martha went to the podium for 2nd place, just a couple of minutes behind the leader and about a minute ahead of 3rd.  Ashley placed 21 and unfortunately, Ellen DNF’d after a mechanical.  She felt strong too and was taking pulls at the front.

For me, this was the usual thrashing of hill repeats and I stuck with the main group until midway through the race after the second lap.  My legs began to fail.  I compensated by keeping a measured speed but was trailing the main group by only a few hundred metres.  By the last lap, the group shattered and it was every man for themselves.  Temperatures reached 81F which I’m usually happy about, though this time, I struggled to chase on back, leaving my soul on the road.  I was as wrung out as a session of hot Vinyasa Yoga.  I was happy to at least finish in the middle of the field.

At this point, according to Strava, my fitness was on a slight decline.  This was the beginning of the plateau.

Tour of the Hilltowns – finished 43rd out of 71 riders

I would have loved to have shared this experience with someone, but solitude had its privileges too.  I could do whatever I wanted.  This was a solo drive out to the Berkshires and I experienced what Northampton, MA had to offer the day before.  I’ve been here last year and it was time I branched out.  Knowing that I wasn’t at top form, I discovered a local tea room, Dobra Tea, which I also frequented in Portland, in town!  It wasn’t an exact replica, but the decor and ambiance was the same.  I later discovered a Tibetan restaurant I wanted to try the next day for lunch, after the race.  Sometimes, dissociation helps with keeping me sane, knowing full well the huge effort required the next day.  The good thing was that I had taught some Yin Yoga for Cyclists sessions to my team, so at least that contributed to my continued healing.

As for race day, it was hot and humid since the evening before saw some scattered thunderstorms.  There were two major climbs, one in the middle and one towards the finish line.  There was a fast descent in the first half of the race, which does no one any favours for getting warmed up.  Legs stiffen by the base of the first climb.

Halfway up the first climb, an attack was made and the group scrambled to chase and shatters.  Everyone was strung out by the time we reach the the other side of the KOM.  I form with a small group and took turns to catch up but eventually get dropped.  Or rather, I wanted to save myself from further injury.  At this point, I relegated myself to a softer pace and let others catch up to ride together.  Fatigue settled in.  My legs were spent.

With more than half of the race done, we enter a false flat for several miles and take turns at the front to pull the group.  It’s amazing how the presence of other riders gives you a second wind.  I try to gauge my competitors even though we were working together to limit our losses in a chase.  Out of three other riders, I felt the strongest.  That was apparent when the road started to slant up to a 3% grade.  Even though my legs were beyond fatigued, I was still able to climb.  By the finish, I had put 17 seconds between me and my last competitor in that group.  Severely dehydrated from rationing my water, almost threw up.

I then reminded myself of the fabulously nourishing lunch I was going to have at that Tibetan restaurant.  I ordered a noodle dish, dumplings and Yak.  I don’t eat red meat but figured this would be a delicacy.  It was satisfying!

After the race, I met up with a couple of my teammates.  Martha placed 8th, Ashley 24th, and Stephanie got a ride back to the finish because she was spent after helping the other two.  She didn’t need the points anyway.  She’s selfless like that.

Tall Sock Racing had a big turnout here on our local grounds as did Downeast Racing, PVC/Cyclemania and Team Rancourt & Co/Rainbow Bicycle.  Everyone from Maine who raced regularly showed up.  The course was challenging as it centered around the commons with one stretch of road uphill was badly rutted from the harsh New England winter weather.  It was enough to dislodge my chain a couple of times, losing momentum.  I knew from the start it would be a difficult race since my conditioning wasn’t built for sprinting having completed more hilly races.  There was an attack from the start, making the selection quick. Someone had their morning espresso.  Or two. Or three.  I had barely clipped in when we started moving.  It was comedic. 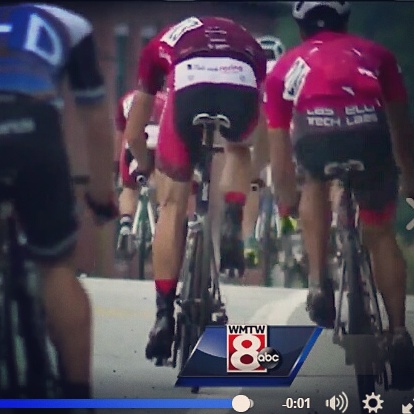 It was only a matter of time before I was lapped – but I kept going.  No one was being eliminated from the race, which was very gracious, but demeaning at the same time.

Hmm…let’s see how many times the laggers get lapped.

I didn’t care.  I went full speed and considered it a mid-season FTP test.  We had 45 minutes to race and I wasn’t going to give in.  When I did get lapped, twice, I was able to momentarily keep with up the main group when they passed.  There was some relief from the aching fatigue my legs were experiencing and the burning of my lungs from the efforts but it wasn’t enough.  Still, it was good practice hitting the racing lines and dodging the occasional oblivious pedestrian crossing the street in front of me.

When a race is within only a couple hours of driving, you’re obliged to show up, even if your body says, “No.”  The course was fun as usual, and I expected to be dropped early on since my legs weren’t responding in the last race.  Still, I was able to take the corners at speed, picking the perfect racing lines, taking turns with one other off the back.  Eventually, we would succumb to the quicker pace of the main group and was eliminated before they caught up to us.  This was a safety precaution since the course had tight corners with little place for slower riders to go.  It was fun nonetheless and my riding buddy, Chris, complimented me on my speed and that I should be in CAT 3.  I wish he could tell my legs that.

Earlier in the day, Ellen raced her CAT 4 women’s race and placed fifth!  That was an incredible result!  From the looks of the finishing times, there was a bunch sprint.  She also made it a point to stick around to see my race.  How thoughtful of her!  She cheered me on just as I did for her in the last criterium.  I love how we support each other.

It was a hot and humid weekend in East Hartland, CT.  I arrived at my 1-star hotel after dodging some gravel roads going 5 mph trying to save my tires and my car.  Obviously this was my first time in the area because Google Maps doesn’t do such a good job at recognizing the types of roads a high performance tarmac car is limited to.  This weather continued on during the race.  There was no relief at all except under the shade of trees.  But on the race course, there was plenty of that.  Little to offset given the effort to come.

There were three of us in the CAT4 Masters and one other in the non-Masters.  The course was picturesque – two laps of 22 miles of smooth, fast and hilly pavement around the Barkhamsted Reservoir.  There was some enjoyment of the scenery at first, but that faded between the hard effort and panting on the first climb after the fast descent where the first selections were made.  I was able to keep up for a time, but the usual fatigue set in and I couldn’t push any harder.  I did everything right – I got enough sleep, enough to eat and no mental distractions before the race.  At this point I knew for a fact I was severely overtrained.  Doing badly in criteriums was okay because it wasn’t my strength except in the early season.  This time, my mental ability went far beyond what my body could do.  I was already looking forward to vacation in my hometown in the next few days.  That would be great preparation for the Green Mountain Stage Race in Vermont.  Do nothing for seven days.