The past few weeks have been a bit of a lull, even though it’s at the peak of cycling season and my form has been the best it’s been ever (at least, according to Strava).  I can only go uphill from this point.  The only setbacks this time are mechanical – in that my only two road bikes broke in front of me (or rather, under me) and I’ve had nothing to ride on except my mountain bike (not the same!) for a few days.  I was fortunate, however, in having a cycling community here in Maine.  Everyone I knew reached out to offer words and actions of support through sympathy or by either lending parts or an entire frame.  The principle here is that no one should ever not ride because you don’t have a bicycle or you have a mechanical failure.  Those who are passionate about cycling knows this and will do what it takes to support you to get back on the bike.  What other subculture does this in the name of health and well-being (or addiction)?

The loaner frame, borrowed from this year’s Yarmouth Clam Festival Race winner (thanks, Eliot!), is now bought and paid for.  (Maybe it will win me races.)  It was only appropriate that I bought it having put so much emotional effort into building the bike.

Yes, I hate internal cable routing (as a mechanic).

The Bianchi Sempre Pro has performed well these past couple of weeks.  Once dialed in, it’s very responsive and stiff.  It will point you to where you want to go, though it’s not as compliant as I’m used to.  I was probably spoiled from my late BMC.

As you probably know, (if my making so much noise passed through deaf ears and by blind eyes,) BMC had initially denied my warranty after my bottom bracket shell broke.  Miraculously, I got an email from BMC corporate and we had a short discussion on the matter.  It took some effort, but BMC finally did the right thing in handling this unique situation.  (Kudos to BMC!)  They honored the full warranty and I actually received it just last week at a bike shop in New Hampshire.  (I would have gone through my sponsor, but they’re not a BMC dealer.)  Talk about lucky!  It’s quite a sight to behold.  All in all, it took roughly one month for this to be rectified. 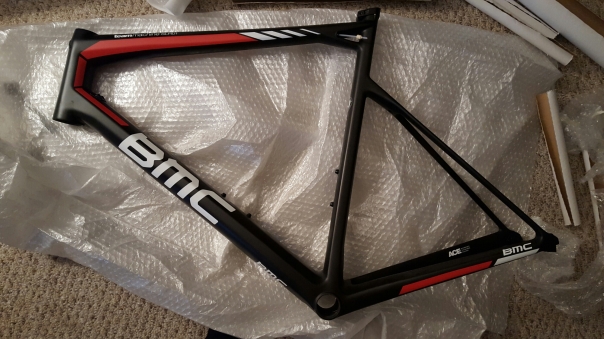 Out of this bike drama, the interesting part is that I learned about a little known law called, “the implied warranty law” which protects consumers from unexpected product failure.  Stipulations of the law may differ from state to state, and not every state may have one.  The fact is, that the BMC frame was 3.5 years old and Maine’s law protects any product for 4 years.  And well, you can connect the dots.  (Thanks, Matt!)

So it seems that all worked out in the end, especially when one stands up for their principles and has a community to back you up.  And when that happens, great things happen.  As for the current status of bikes, I’m at N+1 as I have to spec-out the BMC.  (Component manufacturers, please check out my sponsors page.)  Once the bike is built, I will post a review after my races and rides.  Hopefully it will be completed very soon!

But for now, ride well!